Hope for the fight against obesity!

Posted on December 3, 2020 by Sharief Hendricks Leave a comment

Obesity and obesity-associated type 2 diabetes have emerged as two of the major threats to human health in the 21stcentury. (1) In 2016 about 13% of the world’s adult population was obese. What’s even more shocking is the fact the prevalence of obesity is rapidly increasing in low- and middle-income countries where it used to be more prevalent in high-income countries. It was projected that by 2020 almost 1 in 10 children worldwide and 1 in 8 children in Africa will either be overweight or obese, which is quite worrying! Childhood obesity has been reported to be higher among South African Children. (2)

The consumption of an energy-rich, high-fat diet is known to trigger obesity and various metabolic changes including impaired glucose tolerance, insulin resistance and hyperglycemia. In this study the researchers wanted to investigate whether the deletion of the M₃ receptor gene could prevent or reduce the severity of these metabolic effects.

They found that consumption of a high-fat diet led to pronounced weight gain, hyperinsulinemia, impaired glucose tolerance and insulin resistance in the M3R wild-type mice but these metabolic deficits, induced by the consumption of the high-fat diet, were largely absent in the M3R knockout mice. They also observed that the M3R knockout mice maintained on a regular or high-fat diet consumed significantly less food than the M3R wild-type mice. Also, independent of the type of diet that the mice consumed, M3R knockout mice showed significantly increased rates of resting and total energy expenditure and locomotor activity. These results are shown in figure 1. 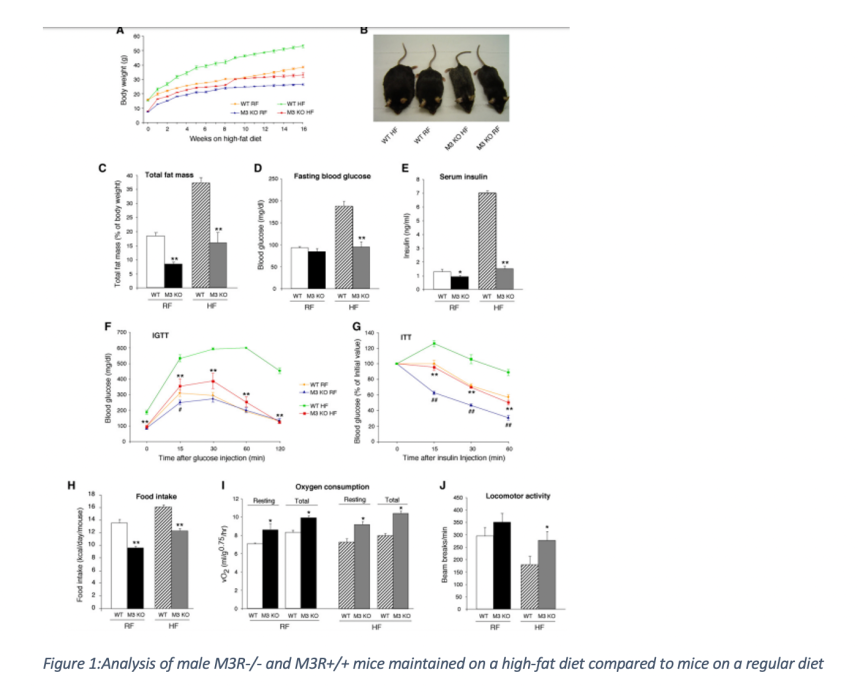 This paper shows that M3R knockout mice are largely protected against the detrimental effects metabolic deficits triggered by a high-fat diet, so the M₃ receptor may therefore represent a potential pharmacologic target for the treatment of obesity and associated metabolic disorders. So, there’s a bit of hope for the future.