The impact of insomnia on physical and mental health

Posted on September 3, 2020 by Sharief Hendricks Leave a comment

“The night is the hardest time to be alive and 4am knows all my secrets” – Poppy Z.Brite, author of Lost Souls

This quote highlights the time of night when the activity of body is at its lowest, melatonin levels being at the highest, body temperature and blood pressure being at their lowest levels while the body’s metabolism goes down. This quote also emphasizes how waking up around this specific time would cause harm allowing your body to be vulnerable and body’s health status becoming irregular, as well as your psychological status.

Insomnia is one of sleep disorders that causes inadequate sleep maintenance, falling asleep and constant non-refreshing sleeps resulting in poor sleep quality. Insomnia has many consequences such as tiredness, poor energy expenditure and unstable concentration during daytime (SASSM, 2016). Pengpid and Peltzer (2018) demonstrated that in rural areas of South Africa, 8% of all adult participants had insomnia symptoms, 8,9% of participants had trouble sleeping, 13,6% had trouble maintaining sleep and 6,5% had poor quality of sleep. They also emphasized that lower education quality, constant crime occurrences, poor health-statuses and depressive symptoms due to rural lifestyle conditions led to further increase insomniac symptoms. They also highlighted that this condition is prominent in middle and older age individuals within those rural areas.

Acute insomnia is short-term due to stress or emotional discomfort or any traumatic event. This lasts from days to weeks due to jet lag, inconsistent sleeping with regards to biological rhythm (SASSM, 2016). Chronic insomnia is long-term due to combination of different medical conditions or issues whilst taking medications that results in sleep disturbances (SASSM, 2016). Chronic insomnia can last up to many months. So how does insomnia negatively impact our daily physical and mental health?

A study by Fernandez-Mendoza and Vgontzas (2013) demonstrated that insomnia with “objective short sleep duration can lead to risk of cardiometabolic and neurocognitive morbidity and mortality”. While, insomnias with normal sleep duration is only because of misguidance of sleep and emotional arousal. However, both insomnia conditions are known to cause harm on mental health. 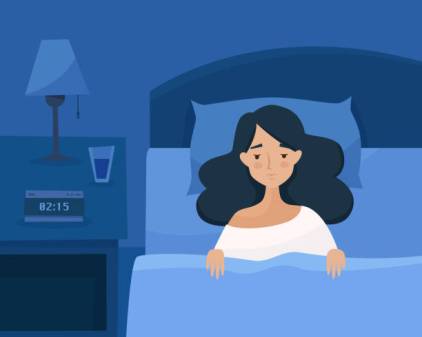 How insomnia has impact on stress system

They suggested that individuals with cognitive emotional hyperarousal (i.e. obsession and anxiety) can act upon insomnia and the insomnia can be triggered from activation of stress systems. Stress triggers the Hypothalamic-pituitary-adrenal (HPA) and the Sympatho-Adrenal-Medullary axes. Sleepiness and its arousal within the animals and humans are known to be caused by Corticotropin-releasing hormone (CRH) and cortisol (these are produced by hypothalamus and adrenals, respectively), and catecholamines (produced by sympathetic systems). However, they proposed that deep sleep especially is known to have an “anti-stress” effect inhibits stress systems by decreasing/stopping the HPA axis and sympathetic systems. Vgontzas et al. (2001) suggested that middle-aged individuals were more vulnerable to sleep disturbances which gave susceptibility to insomnia.

Insomnia and its impact on cardiometabolic activity

Having trouble falling asleep or maintaining poor sleeping habit are associated with cardiometabolic consequences such as diabetes and hypertension (Suka, Yoshida and Sugimori, 2003; Esposito, Marfella and Giugliano, 2004). And difficulty falling asleep or maintaining sleep increases chance of hypertension, myocardial infarction and type 2 diabetes (Suka, Yoshida and Sugimori, 2003; Esposito, Marfella and Giugliano, 2004; Laugsand et al., 2011). Fernandez-Mendoza and Vgontzas (2013) further demonstrated that the chance of diabetes and hypertension were more prevalent in patients with insomnia who slept for less than five hours, while normal sleepers who slept for more than six hours per night had reduced risk of hypertension or diabetes. Vgontzas et al. (2014) also demonstrated that chronic (long-term) non-obese insomniacs who slept for shorter time periods than poor sleepers, did not show an increased risk of obesity. This means that insomnia with objective short sleep duration associated to medical causes like diabetes and hypertension were due to processes other than being obese and weight gain. They also mentioned that insomnia with short sleep duration was more prevalent in individuals with diabetes and hypertensions as well.

Impact of insomnia on neurocognition

Fernandez-Mendoza and Vgontzas (2013) suggested that individuals with insomnia had trouble with maintaining concentration and recalling memories. They proposed that patients with insomnia who had objective short sleep duration maintained significant decrease in their neuropsychological performance tests on memory and cognitive process speed, attention switching and numerous errors with short-term visual memories compared to those with normal sleep durations. Fortier-Brochu et al. (2012) suggested that patients with insomnia normally have impaired performance in cognitive functions such as memory, episodic memory and executive functioning as well.

Ohayon (2002) suggests that 20% of the general population has poor sleep (i.e. symptoms regarding to initiating and maintaining sleep) and about 10% suffers from chronic insomnia. Fernandez-Mendoza and Vgontzas (2013) further deduced that chronic insomnia is a condition that maintains for long period of time, whereas irregular sleep without following biological rhythm resulting in poor sleep is varies for individuals which suggests that insomnia is a disorder while “poor sleep is a symptom of underlying physical and mental health problems”. They further proposed that objective short sleep duration is known to be a risk factor for poor sleep that can contribute towards detrimental form of chronic insomnia.

According to Anita Schlarb, Friedrich and Claßen (2017), 60% of university students have trouble with poor sleeping quality and 7.7% has all criteria regarding an insomnia disorder. Sleep problem indeed have huge impact on students’ life such as their final mark percentages. Owing to doing side jobs whilst studying and stressful exam period that may contribute to irregular daily routine, students need special treatments to improve their sleep quality.

In conclusion, treatment of insomnia should be given a priority to mitigate these negative impacts in insomniacs due to its severity. I believe that treatments should be focused mainly on individuals with objective short sleep duration, individuals with poor sleep associated with stress and possibly genetic history of problems with sleep since we can find the cause and try to reduce certain aspects.